Casey Jones grew up in Sharpsville, Indiana where he enjoyed a close relationship with his family. After graduating from high school, Casey felt a void in his life and decided to pursue something greater. He joined the U.S. Army in 2008 and became a Senior Explosive Ordinance Disposal (EOD) team member.

On May 16, 2013, while deployed in Senjaray, Afghanistan Casey was tasked with clearing a compound that would serve as the location for a command post. As he was assisting his team leader, Casey stepped on a pressure-plate improvised explosive device (IED) which detonated beneath him, causing him to lose both of his legs.

Casey was initially sent to NATO Role 3 Multinational Medical Unit and would eventually end up at Walter Reed National Military Center. Once he arrived at Walter Reed, Casey was motivated by the progress other amputees were making and felt that anything was possible. He spent two years learning how to walk again, and although the process was grueling, his wife Shannon was there to support him every step of the way. 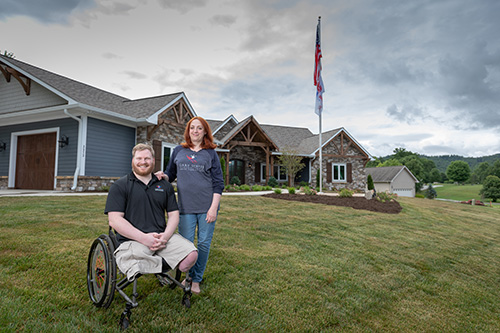 Casey served our nation from October 2012 to May 2013 earning many distinguished awards such as the Purple Heart, Army Commendation Medal (2), NCO Development Award, Good Conduct Medal (2), and the Afghanistan Campaign Medal.

Casey, Shannon and their four pets currently live in a two-story home in Knoxville, TN that is not accessible to Casey’s needs. The Gary Sinise Foundation is proud to provide Casey and Shannon a specially adapted smart home that will ease his daily challenges and allow them to feel comfortable in their own home.

About the Gary Sinise Foundation and Broan-NuTone Relationship
We believe everyone should have a home that provides them with comfort and clean, healthy air. We believe this especially important for those who make having a home possible. That’s why we at Broan-NuTone support the Gary Sinise Foundation’s RISE program. The RISE program builds one-of-a-kind specially adapted smart homes for our nation’s most severely wounded heroes. Our ventilation fans with motion or humidity sensing technology, fresh air systems, and ADA compliant range hoods make fresh, healthy air easy to maintain.